After graduating from the University of Cambridge and the Oxford Institute of Legal Practice, Nicola trained at an international ‘magic circle’ law firm, gaining exposure to pensions and employment law, litigation, trust, commercial and insurance law. She also worked internationally in the London and Prague offices. Nicola then moved to a firm which specialised in advising employers and their pension scheme trustees on various issues including regulatory law, employment and discrimination issues, contracts with third parties, EU law and disputes, including disputes before the Ombudsman. During this post she was seconded to an NGO’s legal department, where she commonly advised on appeals against its decisions to the Ombudsman, often on procedural and administrative law issues and most regularly in cases which involved discrimination, EU law and human rights issues.

Nicola moved offshore to Conyers Dill & Pearman’s Bermuda office in 2013, where she has had exceptionally high-quality exposure, advising her clients on trust law, the interpretation of complex trust governing documentation, international regulation, charity law and commercial issues, including the review and drafting of a vast number of contracts. She has worked on many Supreme Court applications, including an interesting case which concerned the rights of illegitimate children. Additionally, Nicola advises employers in relation to pension matters including the interpretation of rules and legislation, discrimination and employment law issues. Much of Nicola’s caseload involves drafting highly technical legal documentation.

Nicola also takes a keen interest in the development of new legislation and has carried out extensive law reform work. She has been heavily involved with the enactment of cutting-edge Bermuda legislation, having advised the government on new legislation, and researched complex constitutional and human rights issues in connection with the introduction of proposed legislation.

Nicola is recommended in The Legal 500. 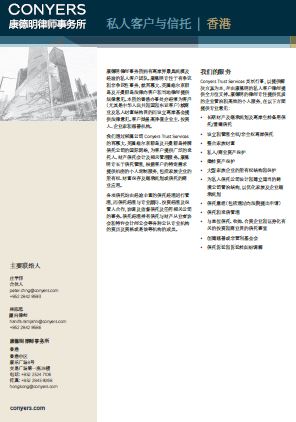